Seoul is a city where the old really does collide with the new.

We stayed in Gangnam, one of seven major city centres and considered the financial or commercial hub – and of course, now made famous by Psy’s hit, ‘Gangnam style’.  By day, it’s shops, offices, banks and business.  By night, a pulsating buzz of people, lights, restaurants, bars, bowling, baseball and music.

We started Saturday at Butterfingers, recognised as one of the top ten places to have breakfast.  One could argue this is not difficult to achieve, given nothing – and I mean nothing – opens before 10am.  In fact, Butterfingers is the only breakfast restaurant that we know of that does open at 7am.  That said, there is good reason for its rating.  One serve will feed two.  And every breakfast comes with at least three pancakes.

With a sick husband at the hotel on day one, I then cabbed it to Myeong Dong, Korea’s most widely known shopping area.  The dozens of streets, malls and alleyways crammed with shops (and people) are equally matched by the same underground shopping network.  Each entry to the underground network is also labelled ‘shelter’.  I’d like to think this means a reprieve from the weather but I suspect it’s more to do with refuge for the population should their friends over the border attack.  I wasn’t able to confirm this.  It didn’t seem an appropriate question

I was pleasantly surprised to find that I could actually shop – I left the Zara store a sizeable deposit in return for clothes in size ‘large’.  My ego is at peace. 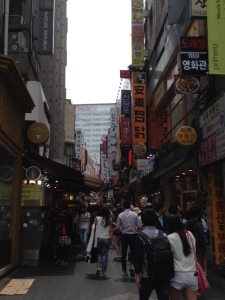 Saturday night, we headed left from our hotel and down the hill to Hooters.  I still can’t work out why, although I know the answer is obvious (and yes, the girls had huge hooters).  From here, we bar hopped through a few German beer halls, up the hill for Dim Sum and back down again, for Thai.  Seeking a night cap, we ventured down four levels to a music bar and bowling alley – one of the more surprising and unexpected discoveries and good fun.  Koreans take their bowling and beer seriously so it only seemed fitting that we do the same. 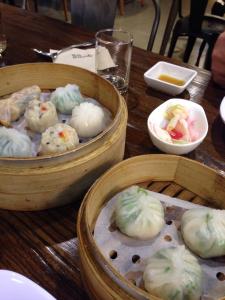 Sunday saw us venture across the river to the city centre and to Deoksungung Palace.  An age-old historic palace originally built during the Joseon period, it sits amongst high rise buildings and cutting edge architecture.  It is the only palace amongst all ancient palaces in Seoul to have a western-style garden, fountain and modern royal palace – a reflection of its place as a bridge between the middle and modern ages.  The guide book says that the changing of the royal guard’s ceremony at the main gate – called Sumumjang -is one of the must-see sights of Seoul.  We were an hour too early but the five costumed gents wielding swords and barely containing their boredom did little to entice us to hang around – and suggested that the Seoul guide book may, in fact, be selling its other attractions short. 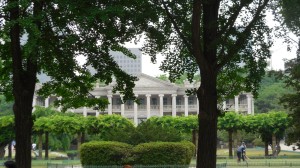 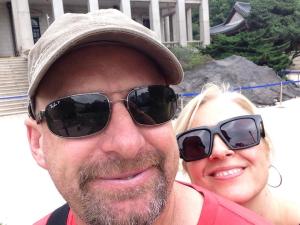 We walked the five or so kilometres across town to the beacon on the hill – North Seoul Tower.  Standing 236.7 metres, this is the 10th tallest tower of the world.  We took the cable car up and back – a somewhat disconcerting experience and not helped by your husband wondering aloud what would happen if the cable snapped.  Not only is the view absolutely worth the effort (it allows you to truly comprehend just how big the city is), but it’s almost like a mini village – full of shops, restaurants and bars, and perfect to sit and have a beer and just soak in the view.  (You’ll note the theme of beer throughout this post – we do our best to always fit in with the local culture). 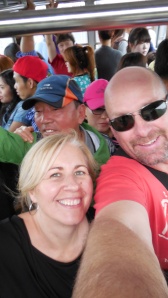 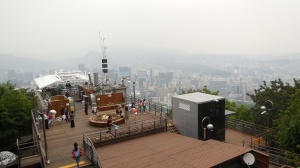 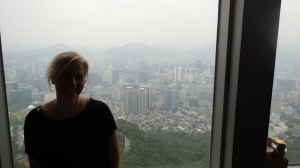 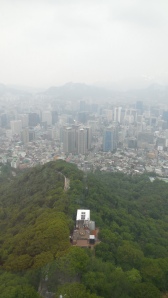 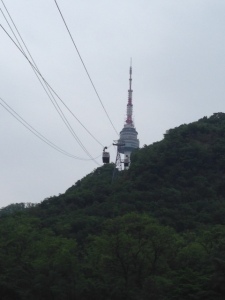 Sunday night was another round of beer halls and wine bars before we settled on Elkin Beer and Wine Bar for dinner.  With meals only $20, we naturally expected to order a dish each.  It was just fortunate that we saw other meals coming from the kitchen before we ordered.  Only a picture could demonstrate the size of the plate – enough to feed at least three people!  We ordered one and shared. 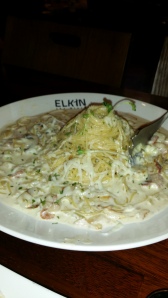 Our final day saw us venture to Itaewon Street, an area recognised for its high expat community and the diversity of its shopping and restaurants.  Behind the main street sits Gyeongnidan-fil or ‘World Food Street’ as it is often referred to – Japanese, Mexican, French, Italian, Greek, Chinese, Thai and Turkish restaurants.  Santorini, a small Greek restaurant with no more than ten tables is particularly popular and offers traditional dishes made from the produce of the day.  It’s on the list for our next visit. 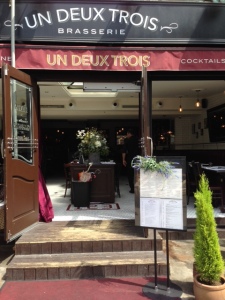 We came though, in search of Antique Street – dozens of fascinating stores selling vintage, antique and bric brac.   We wandered for more than three hours discovering – and wanting – a multitude of interior vintage items.   We settled on two cricket bats, purchased for work mates with children back on the island and not at all what I thought we’d come home with.

Before we left our hotel room for dinner, we wondered aloud if the city would be quiet being a Monday night.  On the contrary.  It became clear why nothing opens at 10am.  They party and they party hard.  A recent report says that South Koreans drink 13.7 shots of liquor per week on average, which is the most in the world. And of 44 other countries analysed by Euromonitor, none comes anywhere close. The Russians, the second biggest in Euromonitor’s sample, down 6.3 shots per week; Filipinos drink roughly 5.4 shots per week; and Americans consume only 3.3. Australia doesn’t even appear in this report, which I’m going to take as a comforting sign.   The upside is that the Korean’s are jovial and polite drunks (something many Australian’s could learn from) and more prone to pass out at the table. 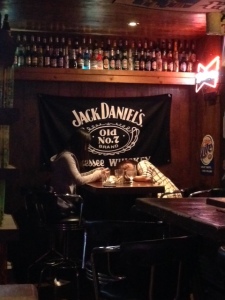 We started at a German beer hall to discuss what to have for dinner.  This can actually be a very involved conversation for the Elliott’s.  We like to consider all options and possibilities.  We settled on Chinese.  Not sure why.  We both just really felt like great Chinese so we did what any logical person would do – we googled ‘best Chinese restaurants in Seoul’.  Din Thai Fung was rated by The New York Times in the top ten of all Chinese restaurants in Seoul and by CNN in the top three – specifically known and lauded for its dumplings.  Two Michelin hats convinced us this was the pinnacle dinner to the weekend that we’d been seeking.  Pfft!  The dumplings were soggy and tasteless and the chilli chicken dish we ordered came out as an overcooked spicy version of KFC.  As the most expensive dinner of our weekend, we were deeply disappointed.

The walk home through new and vibrant streets saw us discover baseball batting nets.  Right there, in the middle of restaurants and bars, were guys practicing their baseball swing as balls flew at them from a machine.  The Koreans are very serious about their baseball, probably on a par with the beer.  Naturally, Rob had a go.

All along the street were little old men offering challenges in return for a prize.  We watched a number of locals try to hit a nail into a board in three swings – with no success.  Of course, Rob saunters up, swings twice and scores.  For his efforts, I got the ugliest pink puppy you’ve ever seen in your life.  Only in Korea. 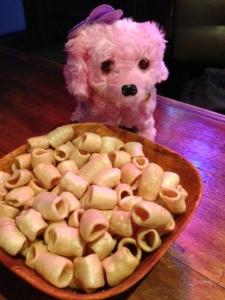