Sometimes, it takes a visitor from home to highlight just how different your life has become.

Take the recent weekend visit from Brian (better known as Snowy), our friend of 15 years from Perth.

It starts on a Friday night when we head into Okpo (the next town, a 20 minute drive away) to attend a function put on by the town of Geoje for the expat community.  The tickets were free so we thought, ‘what the hell’.

Some twenty round tables with wine and beer are laid out along the water front, overlooking the giant illuminated structures of the Daewoo Shipyard, and flanked either end by large buffet tables featuring all kinds of food. 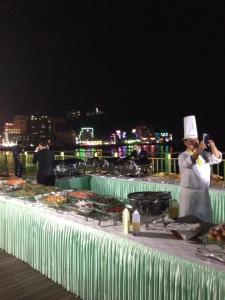 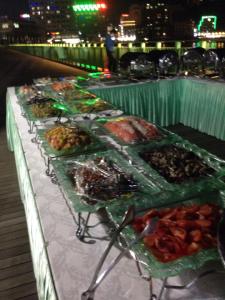 Before we get there though, it’s the usual challenge of finding a park.  We eye a spot but a large bongo van has literally parked in front of it.

“Jode, get out and move the van out of the way”, says Rob.

Brian, who is sitting in the front stares at Rob blankly (I’m guessing he’s trying to register if Rob is serious or not, and so doesn’t move to help me).

I promptly jump from the back seat, check if the van still has keys in the ignition (often they are) or if there is a phone number on the dash to call (nearly always, there is).  In this case it’s neither so I start pushing, knowing that the third option – the vehicle is left in neutral – will be correct.

Lesson one for Brian; how to park your car even when another is blocking the way.

Once I’ve proven my brute strength, it’s off to party Korean style with some 200 or so expats.  The night features Korea’s best-known saxophone player (surprisingly, one really cool dude) who knows how to work the crowd, and the local Korean/Expat band who has us all on our feet and rocking to ACDC, Bon Jovi and everything in between. 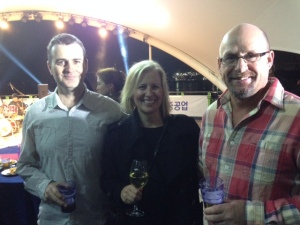 A night cap up the road and then back to the car to organise a driver to take us home.

Again, the car is hemmed in.  This time by a forklift and a bongo van.

Whilst I head to the CU (the equivalent of a 711) to play charades with the little old lady behind the counter (I’m trying to have her call the driver and explain where the hell in Okpo we actually are), I can see the boys doing what they have to do to free the car.

This essentially entails Brian starting up the forklift (you guessed it, keys in the ignition) and moving it a few metres and Rob pushing another bongo van out of the way.

Lesson two for Brian; how to move your car even when another is blocking the way.

Whilst we wait for the Man in Black to arrive, we sit out the front of the CU sipping vodka and lemon from cans we’ve bought there and playing ongoing charades with the woman from the shop; she comes out every now and then to show us on her fingers how many more minutes we have to wait.

The only time charades really gets tricky is when you are trying to ask to use the bathroom, as I did this night.  Naturally you have to make certain movements to illustrate what you need.  Mind you, I did think this was humiliating enough until a friend recently re-enacted her request for kitty litter at the shop last week 🙂

On Saturday, we’re off to Rob’s team building BBQ.  These are organised by the men so something is always missing.  This time, it’s knives and forks.  It’s a little difficult to eat roast lamb, pork and beef and salad with your fingers or chopsticks, so I make my way from the apartment complex where we are – through rice fields accompanied by four billy goats in tow – to the supermarket up the road.  As you do.

This BBQ is also different because it includes all the Korean team members working at the shipyard and assisting the Inpex ‘Right First Time’ (RFT) team that Rob works on.

To be honest, I thought I was at a wedding for a while.  There are more toasts and declarations of love than your average Italian nuptials. 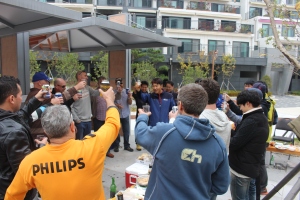 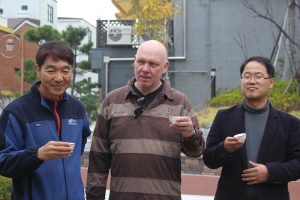 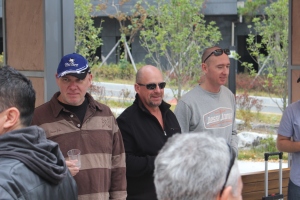 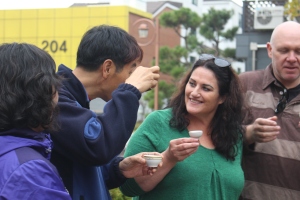 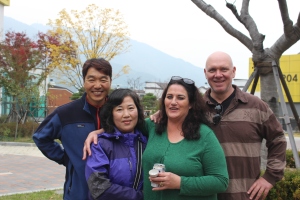 Apparently this is a brotherhood.  Or so the official ceremony later indicates when a candle is lit, a declaration is read and much soju is had. I could explain further but a video sums it up perfectly.

Lesson three for Brian: You come to Korea with one brother and you leave with 20. 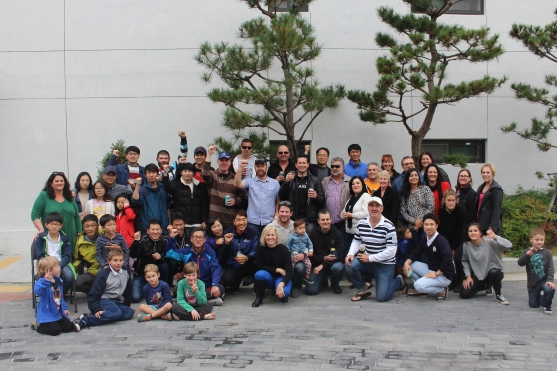