When the President of Korea decides to award an additional public holiday to celebrate Independence Day only seven days in advance, getting off the island proves more difficult than one would imagine.

Russia and China are not possible – both require visas – and places like Hong Kong, Bangkok, Cebu and Vietnam are all just a bit too far for a long weekend.

This leaves us with Fukuoka in Japan.  At only 50 minutes flying time, it makes perfect sense.

With a population of 1.5 million, Fukuoka (which means ‘Happy Hill’) sits on the northern shore of Japan’s Kyushu Island.  Historically, it was divided by the central river into two separate cities, Hakata and Fukuoka before their merge in 1889 and is now known for its two main centres; one in Hakata and one in Tenjin, where we are staying.

According to WikiTravel, Fukuoka is a good starting point for first-time visitors to Japan, and we couldn’t agree more.

Being a sizable, modern city, it’s still not hard to get around. A subway connects most of the city’s main attractions, providing transportation between Hakata, Tenjin, Fukuoka International Airport, Meinohama, and Nishijin (where you can find Fukuoka Tower and the baseball ground of the Softbank Hawks: Fukuoka Yahoo Dome). The main station in Hakata marks the terminus of the Sanyo Shinkansen bullet train with regular options to Tokyo, Osaka, Hiroshima and most other main locations around the country.

Fukuoka is best known for its ancient temples, beaches, art museum, beer breweries (including Asahi tours) and modern shopping malls, like Canal City. Within Ohori Park, and neighbouring Maizuru Park, you’ll find ruins of the 17th-century Fukuoka Castle. Some of which we manage to see, and some we leave for our follow up weekend in late September.

We’re at our hotel, Il Palazzo by 8pm on a Thursday night.  It’s an Italian architectural masterpiece right in the centre of the action in Tenjin along the river, and where our three day eating odyssey begins.

We cover the spectrum across three nights – from budget street stalls, to middle-of-the-road, to high end teppanyaki degustation.

Set up along the river are dozens of street stalls, meticulously unpacked and re-packed (and towed away) each evening.  Most don’t begin to serve until 7.00pm but you will find exceptions.

We settle on the only stall that has two available seats.  Most are at capacity with a waiting queue along the water.  No one speaks English and the menu is only offered in Japanese – to be expected.  We do, however, have a refrigerated shelf in front from which to select pieces of seafood or meat. 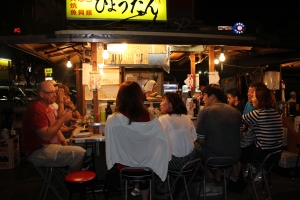 We instead take a look at what our dining companions are eating and the game of charades begins.  We manage to order calamari, two serves of tempura prawns and vegetables, and two Asahi beers (naturally).

The locals seem highly amused that we are there and we’re more than aware that the discussion and riotous laughing is at our expense.  They go on to order us a serve of Wagyu beef and pour beers from their own bottles, all the time declining our attempts to repay in kind. 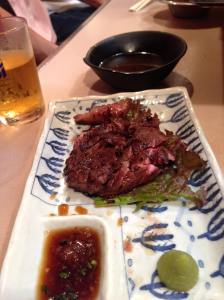 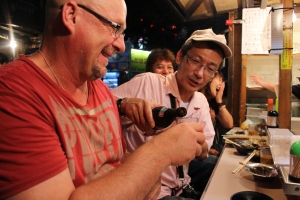 In their limited English, they want to know where we are from and consistently applaud our chopstick skills.  What we wouldn’t give for subtitles about now.

The calamari and Wagyu beef are just-seared on a small grill to the side of the cart.  Both are melt-in-the-mouth.  The tempura is light and golden and cooked to perfection.

On the second night, we wander further along the river to the left of the hotel and discover the Sunset Rooftop Bar from a banner on the sidewalk advertising $10 glasses of Moet.  Perched on the 15th floor, the bar is elegant and sophisticated with commanding views of the entire length of the river.

It’s an impressive (and extensive drinks list), even including Shaw & Smith chardonnay by the glass ($11).  Our preference in dining in any new city is to do so progressively, with a different course at a new location.  Tonight, we start with prawn and pork steamed dumplings as our appetiser (if we’d known what was to come, however, we would have left this well alone).

After three drinks here, we wander to an Irish pub where we seek recommendations on a good teppanyaki restaurant, which leads us to Hachi Steakhouse.  A kind man calls ahead for us and by the time we round the corner to the restaurant, the concierge is waiting on the street to escort us to our own private dining room.

There are a number of options.  We decide to throw caution to the wind, and without knowing what any of the courses will be, select the seven course degustation.

We start with a cold noodle dish – delicate and refreshing.  Next we are brought an asparagus au gratin (I’m pretty sure I moaned through every mouthful).  Our third dish is an almost sweet pumpkin soup, followed by a salad. 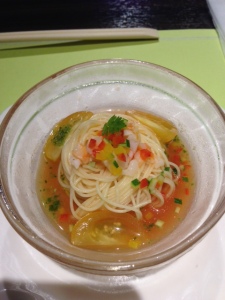 Then our master arrives at the grill – the man wielding the equivalent of samurai swords.  Two giant prawns are seared and then expertly dissected to retrieve maximum flesh.  With a nob of melted butter and white wine, the morsel is elegantly plated in front of us.

(Note: I will say that when the prawns were bought out, they were alive and placed on the grill that way, which I found incredibly distressing and unnecessary.  As we were to discover during our stay, this is a common approach to cooking or preparing seafood).

We finished our main with a piece of expertly seared Wagyu beef and an assortment of grilled vegetables.

Thanks to the earlier dumplings, we’re too full to eat dessert (or even see what it was).

Cost: Seven courses for $108 AUD per person (not including drinks). Good wine selection from France, Chile, Australia and South Africa.  WORTH. EVERY. DAMN. CENT.

Our third (and final) night sees us return to the Rooftop bar (who wouldn’t?) before we wander the streets towards Canal City (the huge shopping mall entrance), where we take a chance on another restaurant with a large central communal table.  No one speaks English but by now, our charade skills are honed.

Chefs work from the centre of the communal table creating works of seafood art – whole fish and calamari are expertly prepared and presented on large bowls of dry ice, giving the food a rather theatrical effect.  The fact that the calamari is whole and still moving when presented, however, is rather confronting.

Rob orders tuna sashimi, something that still astounds me to this day (this is a man who, up until recently, would not eat a fillet of fish unless it was crumbed or battered).  He’s now a connoisseur of chunky raw fish – something I still can’t enjoy, despite many attempts.  I settle on the creamed crab croquette, which is so good, we order another. 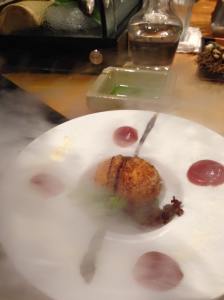 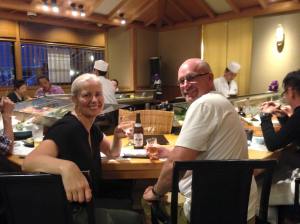 There are other dishes too – tempura prawns and vegetables, more Wagyu beef and duck breast.  My wine is replaced without having to ask and the table seems delighted that we’ve joined them.

Things to See and Do

From Hakata central station, you can easily purchase a bullet train ticket to Hiroshima, one hour away.

Once disembarking the train, follow the signs to the City Loop Bus which, for $4 a ticket, will provide you with a full loop of the city’s highlight locations on a hop on, hop off format.  The bus picks up in 30 minute intervals.

We make our way to Peace Park and the museum after a brief (and in our view, highly overrated visit to the Castle).  Spanning some 120,000 square meters, this is the area that, prior to the atomic bomb, was the political and commercial heart of the city, and for this reason, was chosen as the target. Four years to the day after the bomb was dropped, it was decided that the area would not be redeveloped but instead devoted to peace memorial facilities. 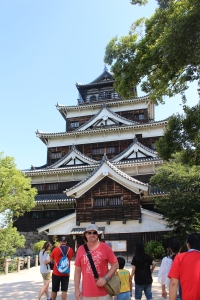 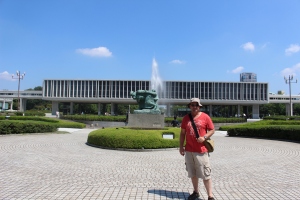 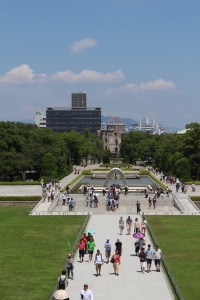 By pure coincidence, we find ourselves here on the 70th anniversary of Japan’s surrender. The museum, which is highly confronting and emotional, is shoulder-to-shoulder moving room only. 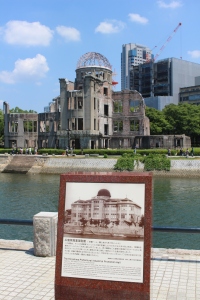 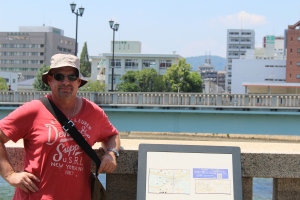 Hiroshima is a must-see destination and ideally done from Fukuoka, given its close proximity.

We hired a guide to do a 2.5 hour walking tour covering the Tochoji and Jotenji Temples (both Buddhist) and the Kushida Shrine (Shintoism, a Japanese religion dating from the early 8th century and incorporating the worship of ancestors and nature spirits and a belief in sacred power ( kami ) in both animate and inanimate things. It was the state religion of Japan until 1945).  Along the way, we try matcha icecream and tea. 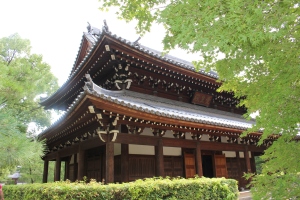 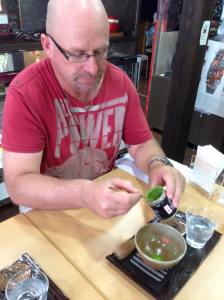 It’s a relaxed and highly informative way to see parts of the city and learn about the different religions.  And Rob did get to pray to the fishing Gods.

Il Palazzo; winner of a number of architectural awards, it’s a dark, somewhat foreboding and windowless structure (frontage), but ultimately oozing with that certain European sophistication.  There are mixed reviews on Trip Advisor, which is not entirely unexpected, as it’s not for everyone.  Firstly, you have no view from the rooms, and the rooms are dark.  There are no English TV stations (we didn’t care, but you may) and no coffee provisions.  I personally also don’t like all room controls on only one side of the bed.  The bed, however, is very comfortable (not our usual experience in Japan) and it’s in a prime location.  Fabulous bar and restaurant options.  Recommended.

Excel Hotel Tokyu; right on the water front and in amongst the restaurants and bars.

In our last blog on Japan, we were rather clear we were not impressed with the two locations we visited.  The weekend in Fukuoka has thawed that view but not to the point we’re raving fans.  At least not yet.

What we do love first and foremost are the people – just as friendly, warm and welcoming as they were the first time.  Their public transport – particularly in Fukuoka – is nothing short of exemplary and like something out of an episode of Mad Men.  The trains are incredibly retro with wood panelling and either orange or moss green velvet seating.  The cabs are immaculately kept with drivers wearing suits and hats.  The doors open automatically and the seats are covered in what can only be described as a giant doily.  What’s not to love?

And finally, the food….the food, the food, the glorious food.  It also doesn’t hurt that good wine and champagne is so readily available and at a reasonable price.

We will maintain however, that based on the three cities and associated country side we’ve travelled through via train, Japan has some of the least appealing cities we’ve ever encountered.  There is simply nothing remarkable about the architecture (save the odd temple), urban planning or street scapes.  Sadly, there appears to be few parklands and greenery, and little development of rivers and water ways.

That said, we look forward to returning again in late September to do it all again with friends 🙂