The weekend to Fukuoka begins in February over one very long boozy lunch – one that actually deserves its own blog, but alas, I digress.

It’s Friday of the Chuseok long weekend holiday and we’re off – Sandy, Biz, Ann-Marie, Rob and I – in a chauffeured car to the airport, sipping bubbles and congratulating ourselves on how clever we are to have actually pulled this off.

Except for one major omission.  Richard, aka Dickie, now has to work and can’t come.  And so it becomes known as the Dickless Weekend.

Surprisingly the airport is quiet for the eve of South Korea’s most major holiday (think the equivalent to Thanksgiving) but not surprisingly, we find ourselves meeting our expat friends off to places like Vietnam, China and like us, Japan.

It’s a 30 minute flight, a quick train ride into the city and we’re at our hotel and out to dinner by 8pm.

Tonight, it’s the Elliott’s turn to host the restaurant choice and we return to our favourite restaurant from our August visit.   (We’d love to tell you the name, but a photo is the best we can do).

We sit at the communal table whilst Chefs work from the centre creating works of seafood art – whole fish and calamari are expertly prepared and presented on large bowls of dry ice, giving the food a rather theatrical effect.  Our travelling companions are as equally fascinated by the whole calamari still moving on the plate as we were for our first visit.

Biz works fast – he’s decided within a few minutes of perusing the menu what he wants and opts for the five or six course menu option (to be honest, they just kept coming and we all lost count).  We four instead select a la carte items from the menu – sashimi, tempura prawns, dumplings, creamed crab cakes and pork belly.  It’s just as good as we remember.

Besides the food, the other joy of Japanese dining is the pleasure they clearly have in welcoming and serving you – there are cheers, clapping and loud ‘oi’s’ when something pleases them.  It makes for a lively and fun dining experience.

We wander around the Tenjin canal and finish with a night cap at a roof top bar.

Saturday morning sees us train it to the other side of the city to join the Hop On Hop Off bus – only to learn that all tickets have been sold – and essentially eliminating all hopes of sightseeing for the day.

Instead, we make our way to the infamous knife shop discovered by Richard and Ann-Marie during their last visit (okay, it’s only infamous because it’s the discussion of the knives over the long boozy lunch that prompted this visit in the first place).  Whilst Biz and Rob spend what feels like an eternity selecting knives, the girls head next door for a 30 minute reflexology treatment.  It’s so good we convince the boys they need one too whilst we shop. 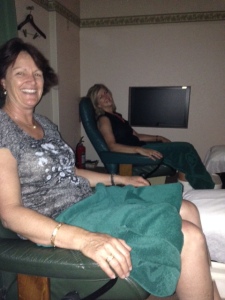 Designer labels such as Louis Vuitton, Prada and Chanel dominate.  Jimmy Choos and Christian Louboutin shoes retail for up to $13,000 AUS a pair, leaving us wondering how many people living in Fukuoka can afford such items.  I mean, really?! 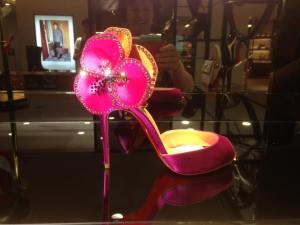 A late lunch is at a small basement restaurant where Biz again beats us all by literally ordering at the door.  This is a man who knows what he wants when he wants it 😉

We find ourselves eating another round of rice, dumplings and tempura with beers for the boys and Saki for Ann-Marie and me. 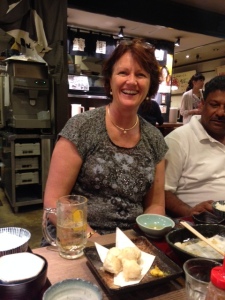 It’s Saturday night and we take our party to the Sunset Rooftop bar, an elegant and sophisticated restaurant/bar we found during our last travels.  Perched on the 15th floor with commanding views the entire length of the river, the real attraction is the $10 glasses of Moet offered over the three hour ‘happy hour’ period. 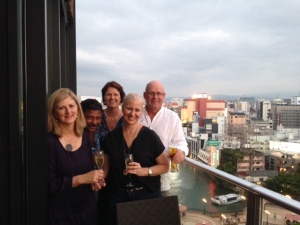 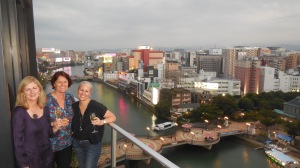 As we are escorted to our table on the balcony, we pass through the restaurant where there is a formal function underway and two Geisha.  Given its incredibly challenging to see a Geisha at the best of times, we’re pinching ourselves that we have a front row seat to the entertainment beyond the glass.

We enquire with our waiter if we can have a photo and are quickly advised that it is not possible – nor appropriate.

Within the hour however, our waiter returns and advises us that the Geisha will allow us to photograph with them (I’m wondering if the bar is so impressed with our bar tab that they are rewarding us accordingly)

We follow our waiter back through the restaurant to a dark corridor behind, to find the two Geisha waiting.  Whilst they do not interact with us in any way (and we certainly are not allowed to touch), it is a rather surreal experience and the highlight of our weekend.

Dinner tonight is at Ann-Marie’s selected restaurant, found during her and Richard’s last visit – Jellybeans La Cave.  Whilst the name might just be the strangest I’ve ever encountered for a restaurant – particularly a French one – the food is some of the best you will eat.

La Cave is a long, narrow and dark establishment along the canal, with bar seating an option front-of-house.  This is exactly where we perch ourselves, so we can watch the chefs do what they do best. 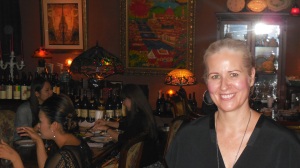 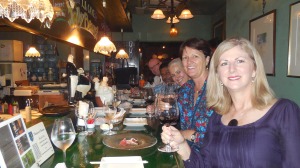 A blackboard menu (all in French and Japanese) is bought out for us to select from.  Having no real idea, we let our host know that we’d like a selection of entrees and a main – some select poached seabass and others the braised beef cheek.

Expecting maybe one, at most two entrees, we soon realise we’re about to sample every entrée on the menu.  Plate after plate of seriously good food arrives – Mackerel terrine, foie gras, seasonal vegetables and frogs legs (a first time and delicious).  Given our late lunch, I’m truly struggling to process so much food, as spectacular as it is.  Rob, perched at the end of the bar, is also starting to suffer with the onslaught of a cold. 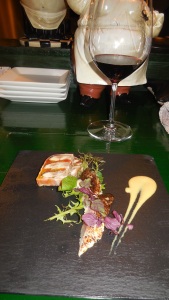 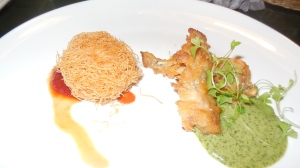 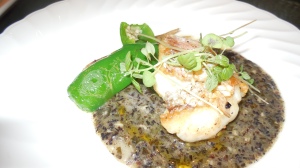 My dining companions will tell you that the colour drained from my face when foie gras was presented and I never quite recovered.  I have a personal and major issue with how foie gras* is made and the extreme cruelty to the goose so whilst part can be attributed to this, the reality is that I am full to the brim.  I am literally struggling to eat all the food.  Not one to be beaten however, La Cave will be on our ‘must list’ for our next visit and is highly recommended.

Rob and I leave Sandy, Biz and Ann-Marie around 11pm and head back to the hotel.  They promise they are not far behind.

It’s now Sunday morning and I wake to a post on Facebook of Ann-Marie and Sandy at a police station and a message saying, ‘Jody Elliott, where the bloody hell are you when we need you?!’

What on earth did I miss?! 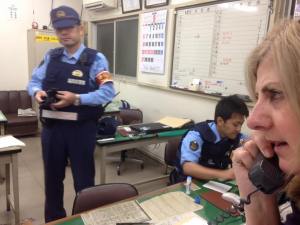 It turns out that Ann-Marie has left her phone in the back of a taxi and doesn’t discover this is the case until all three are back at the hotel.  In the interim, Biz has gone up to the room for a moment, with the plan to meet them back in the lobby for a nightcap.

He returns to find both girls gone and thinking they’ve walked up the road to find a bar, he wanders off in pursuit, not knowing they’ve returned to the restaurant to find the lost phone.

You can see where this is heading right?

Poor Biz is wandering the dark streets of Fukuoka searching, not only for his drinking companions, but a bar that will serve him one.  The other two are miles away at a police station now they’ve realised that the phone has been left in the cab.  The Elliott’s are blissfully unaware and soundly sleeping.

In what we have come to expect in both South Korea and Japan, both the staff and the taxi company go above and beyond to have the phone returned.  In fact, the phone is actually delivered to our hotel, saving Ann-Marie the task of going elsewhere to retrieve it.

The Sunday breakfast debrief is amusing to say the least.  Biz is repeatedly asking why they couldn’t have phoned him to let him know where they were (well, they did get home some two hours later) and they are consistently protesting that it wasn’t that easy.

And so ends another fabulous Fukuoka weekend – a highly recommended port for those travelling to Japan from South Korea.

Thank you to our highly entertaining and very easy travelling companions for such a fun weekend.  Let’s do it all again – next time, with Dickie 🙂

*In another weekend of outstanding food, it pains me to say that the foie gras was the highlight 😦 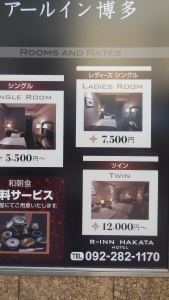