“I’ve booked us cheap flights for a long weekend in Bangkok”, says Rob by phone.

“Oh”, is my only reply.  I honestly can’t think of anything worse.

I’m Asia’d out.  I’m over travel.  Impossible to imagine I know, but it’s how I feel.

We’ve only just returned from Europe four weeks prior and I’m packing a bag again to a city I’m expecting to be loud, smelly, dirty, sleazy and chaotic.  It’s going to require effort.  And I just can’t muster the energy to be the perfect tourist.

We agree that we’ve seen enough temples and palaces to last a lifetime, or for at least, the near future, so we start to work out other ways to enjoy our time there.

If you are like us, and want to enjoy Bangkok on a more chilled level, here’s a few suggestions on how.

Do a cooking class

There’s a plethora of options available (see here for ideas).

We decide on a private class at the Bangkok Thai Cooking Academy located along Sukhumvit Road.  We’re sent a list of some 80 dishes ahead of time to select the four we wish to cook on the day – Thai green curry paste, Pad Thai, Tom Yum Goong and Black Pepper Beef (the latter dish has been a Holy Grail search across Asia to find a recipe remotely like the one that Rob had from his favourite street stall when working in Singapore for a year).

We meet at the local market (clear instructions sent ahead of time and all very easy to find) – for a tour and explanation of the local produce before we make our way to an air conditioned kitchen with our own chef and dishwasher (I mean really, this is the only way to cook right?).

To the amusement of our kitchen helpers, there’s much banter and serious competition between Rob and I. 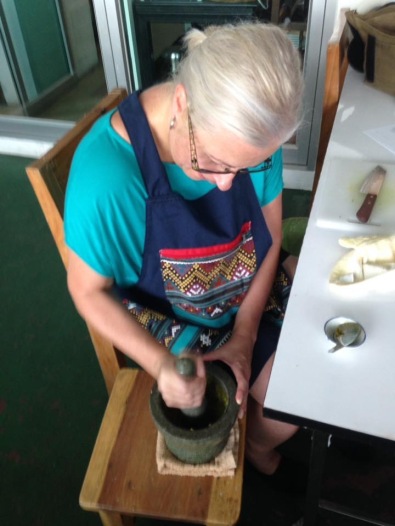 But in the end, it doesn’t matter as our dishes are produced together and taste equally delicious.

Rob tells me that the Black Pepper Beef is on par with his Singapore memories.  We can sleep again.

Dine at a unique restaurant

Before we go, we have two specific theme restaurants recommended to us.  One is Dining in the Dark (which we discount because, as Rob says, “I eat at least 50% with my eyes!”) and the other is Cabbages and Condoms, a restaurant conceptualised in part to promote better understanding and acceptance of safe sex and family planning.  In fact, their food is guaranteed not to cause pregnancy (their promise, not mine).

We dine in a pretty courtyard, with overhanging trees twinkling with thousands of fairy lights.  Large fans and water mist blows across the area to keep the temperature down as you dine on the spicy array of dishes.

Stop at the shop on the way in for a sex-themed souvenir, and make sure you take the necessary ‘safe sex’ photo on your way out.

The food is authentic Thai – delicious, spicy and designed to raise your temperature….or perhaps, put you in the mood.

Take a cruise up the canals

Sunday morning is spent on a leisurely and peaceful cruise on a long boat from the central pier to Thonburi, the old Bangkok capital situated on the western banks of the Chao Phraya River.

Avoid the over-crowded ferries (granted they are much, much cheaper) and hire your own boat and guide to gain a real sense of how people in Bangkok used to live – in stilted shacks, old wooden townhouses and dilapidated lean-tos (although there is a noticeable rise in re-development going on). 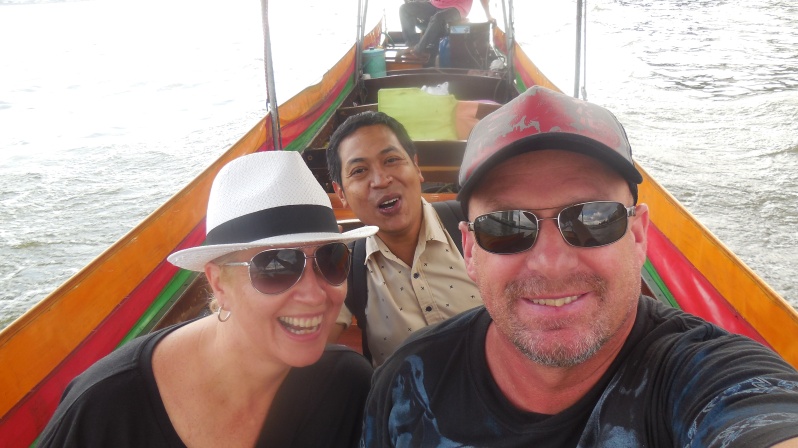 On the way up, we stop for our guide to buy a couple of bags of multi-coloured cheese puffs to feed the large number of catfish swimming about.  Apparently the cheese puffs are good because the fish work themselves into an absolute frenzy getting to each morsel.  Rob thinks I am kidding, but that water hit me twice in the left eye and I was literally blinded for a good thirty minutes.   I had genuine fears it was for life.

We end our journey at the local markets selling all kinds of fresh and ready-made food.  Take your appetite! 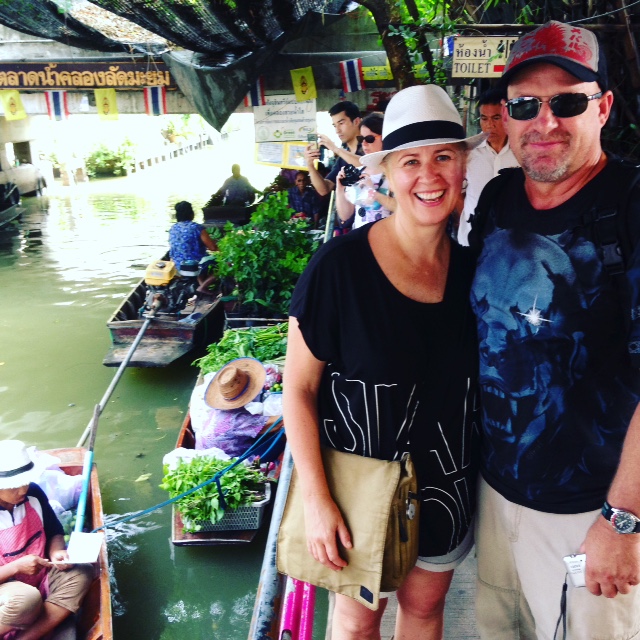 Shop till you drop

Where do I begin? Firstly, by declaring I’m not much of a shopper.  Sure, I like a good session at the shops every now and then, but it’s typically not something I do when on holiday.  There’s too many other fun things to do.

Not in Bangkok.  I could go for a week and shop, shop, shop.  We only cover two of the major shopping centres but they are jaw-droppingly-never-seen-anything-like-it-good – not in New York, not in London, not in Paris, Amsterdam…….well, you get my drift.

The first centre is Terminal 21.  Located near the Asoke sky train intersection and opened in 2011, it’s a one-floor, one-theme shopping mall. Each floor is decorated as well-known street markets of the world from cities such as Rome, Paris, London, Tokyo and Istanbul.  You depart each floor via the longest escalators in Thailand, up to 36 metres.

To illustrate, the London floor is decorated with iconic red telephone boxes, London’s double-decker buses, the Tower Bridge and a Union Jack Flag. Its theme is Oxford Street of London, with mini-shops of men’s wear, jeans and sporting goods.  The toilets are done as the London Underground, winning Restrooms of the Year in 2013.  And for good reason.  It’s off the charts clever.  Not even Oxford Street looks as good as this shopping floor.

One stop further along from Asok (and Terminal 21) on the Sky Train at the PhromPhong BTS station, you’ll find Emquartier Shopping Centre.  It boasts over 400 international and local leading brands – everything from Chanel, Prada, Louis Vuitton to Zara, H&M and Banana Republic.  Just make sure you take time to visit the food court and supermarket on the ground floor – everything from Harrods to quaint Parisienne patisseries to Pie Face.

Much of the central Sukhumvit Road area is littered with bars so you are spoiled for choice.

We found ourselves at four in particular:

Located on Sukhumvit Soi 11 and now in its third decade, Cheap Charlie’s is a Bangkok institution.  More a roadside shanty, it’s literally a wooden bar front to which thousands of memorabilia items have been added to over the years – everything from operating train sets to fake boobs to stuffed animals.  This place has no phone, no website, no interior and almost no tables and chairs, yet attracts a vibrant crowd – albeit mainly expats and westerners.

We’ve since read that a company has nabbed the corner for development, so this will likely be the last year you can enjoy this legendary spot and a reasonably priced cocktail for this part of town.

I’m not going to lie, I had major reservations about this place.  I’ve been to a few strip clubs in my time (did I just say that out loud?), but I was concerned this locale would be sleaze-central with under-age girls held against their will.  And the truth is, there probably is.

But it is not our experience.  Whilst it’s not my idea of career-heaven, all those we do encounter seem happy enough.  We go early – around 9pm – and so have a number of bars to ourselves where the girls and lady boys perform just for us.  Whilst I like to think I’ve been around the block a few times, I still learnt a few things that night that I probably would have rather not.  Just ask me next time we chat. 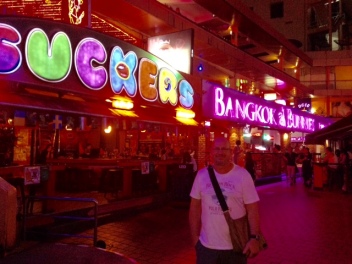 Nana Plaza is considered a more ‘adult’ scene than the better-known Soi Cowboy or Patpong, which means no families or hordes of tourists keen for a look. 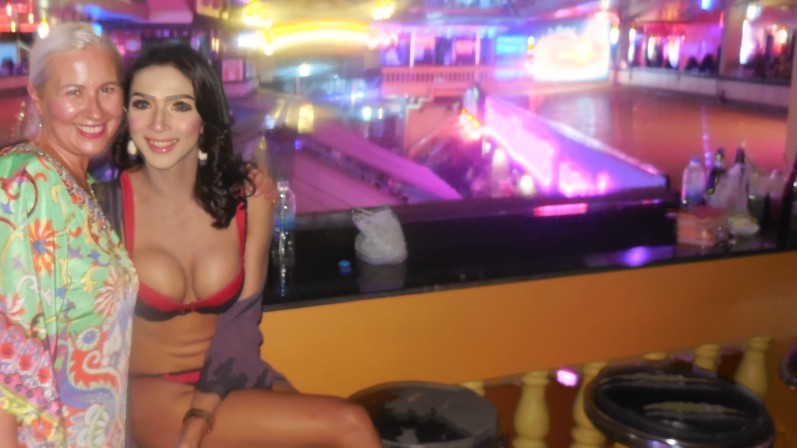 Located just steps from the Asok sky train station, Axis and Spin sits perched on the 38th floor of The Continental Hotel.

With a dazzling panoramic view of the city, the bar is vintage-themed with plush armchairs, animal statues, old bicycles and a cocktail menu divided according to “Pre-Prohibition, Prohibition, and Post-War” drinks.  It’s the perfect place to settle in for the evening or finish with a nightcap, as we did. 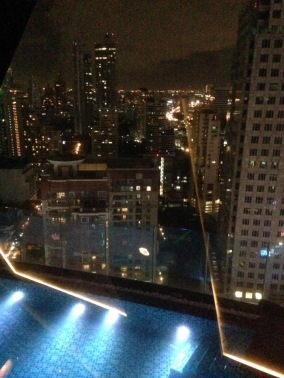 If you are expats like us, or have been away from Australian shores for an extended period, you’ll likely be craving a piece of home.  Also located on Sukhumvit Soi 11 (about 300 metres up from Cheap Charlie’s on the same side of the road), The Australian Pub lured us in with its great live band (performing most nights), half price Jack Daniels and Coke, and green and gold paraphernalia.   They also play AFL games and other Aussie sports on big screens dotted around the bar.  Aussie Aussie Ausie, oi, oi, oi!

Despite my initial reservations, Bangkok is hard to resist.  We both loved it.  It is hot, humid and busy but not so much, that it is uncomfortable to get around (in fact, we’d rate their train system as the easiest we’ve ever encountered too).

We’ve decided we haven’t finished with Bangkok – there is still so much more to see and do.  By our estimations, you’d need at least a week to cover it all. 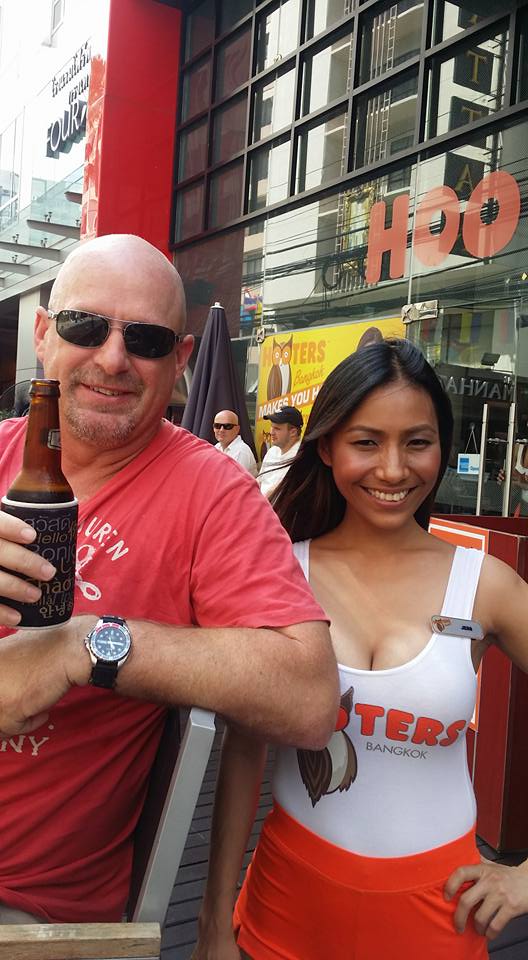 When Rob told me he’d booked someone to meet us at the plane door, get us through customs without waiting and into a limousine, I naturally thought he was kidding.   He was not.  We were off the plane and into the car within 20 minutes.  Tip: travel with carry-on luggage like we did to make it this quick.

Request your hotel to arrange this service for you!

We recommend the Grand Swiss Bangkok on Sukhumvit 11, right in the heart of the action – 200m from Nana Station, across the road from Cheap Charlie’s and Snapper and only 500m or so to The Australian Pub.

We booked a Grand Executive Room on the top floor giving us access to the Club Floor Lounge Sky Bar with complimentary cocktails, beer, wine and canapes between 5.30pm and 7.00pm – and a fabulous view. 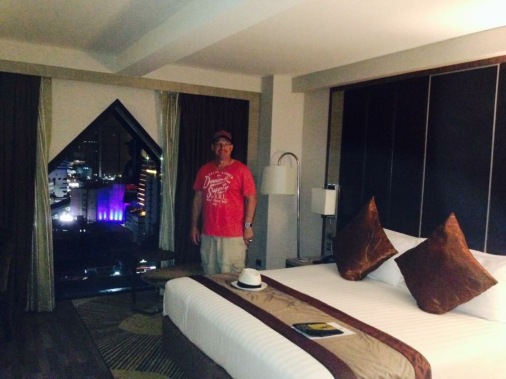 Whilst we did eat a great deal of Thai, there are two other restaurants of note.

Outside of Australia, the best fish and chips we’ve ever eaten.  Ever.  Located just behind Cheap Charlie’s.  It was so good, we ate there twice. 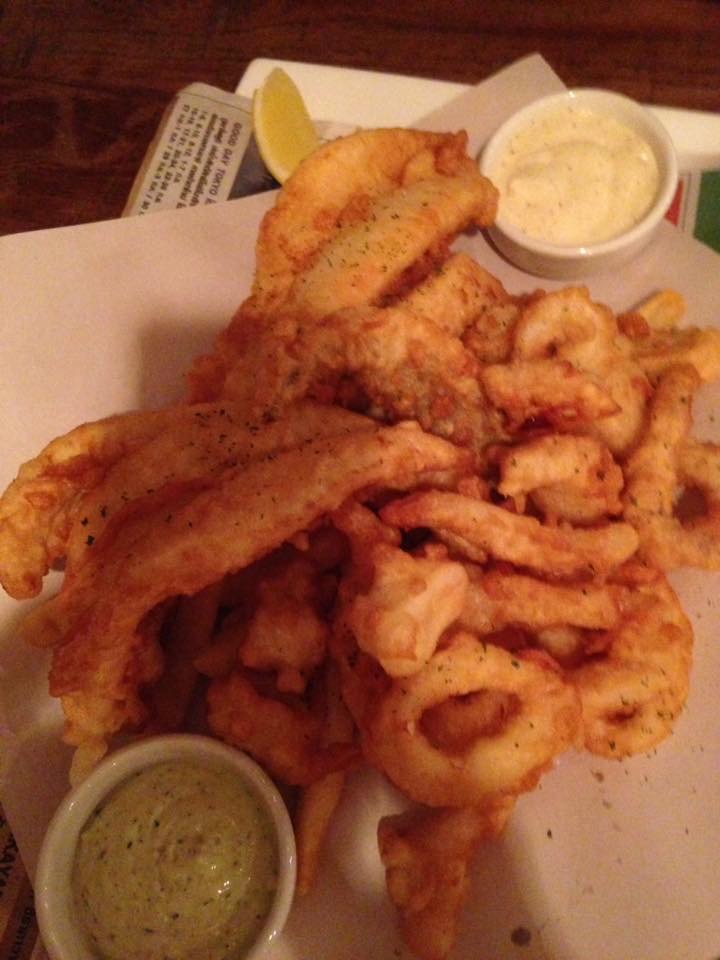 Does anyone do a steak better than the Argentinians?  I think not.  One of my most favourite meals ever was in an Argentinian restaurant in Prague many years ago, and this one compared.  Succulent steaks with a great selection of sides – baked or mashed potato, grilled asparagus and any sauce you want.  Simply delicious! 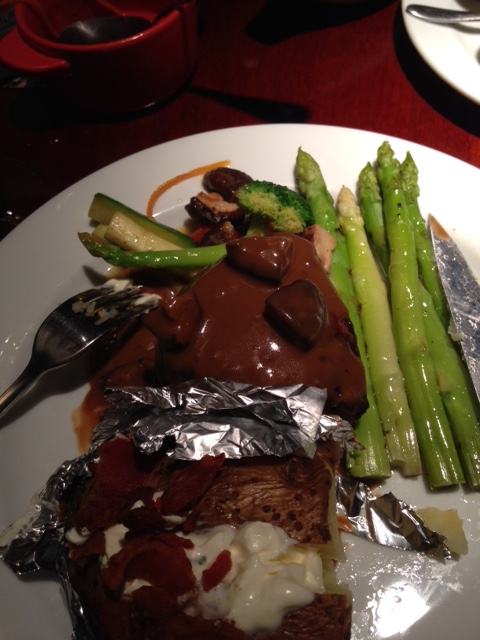